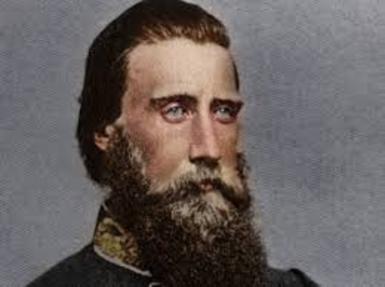 Lieutenant-General John Bell Hood, general with temporary rank, 1864, was born in Owensville, Ky., June 1, 1831. He was graduated at the United States military academy with the class of 1853, which included his subsequent antagonists, McPherson and Schofield. During his West Point life his fiery courage and persistence were impressed upon his associates. Years afterward General O. O. Howard, finding the Confederates active in his front, on the west of Atlanta, said to Sherman, "General, Hood will attack me here," and when Sherman expressed his doubt, Howard responded that he had known Hood at West Point and that "he was indomitable." In the rank of second-lieutenant Hood served about two years in California, after his graduation, and was then transferred to a new cavalry regiment of which Albert Sidney Johnston was colonel and Robert E. Lee lieutenant-colonel. He engaged in frontier service in Texas in the winter of 1855, and in July following was wounded at Devil's river. In 1858 he was promoted first lieutenant, and in 1859-60 he performed the duties of cavalry instructor at West Point. Resigning his commission in April, 1861, he entered the service of the Confederate States, reporting to General Magruder on the peninsula of Virginia. With the temporary rank of major he was given command of the cavalry of this district by General Magruder, and on the organization of the cavalry companies into a regiment was promoted lieutenant-colonel. Next commissioned colonel of the Fourth Texas regiment in September, 1861, he thus began his association with the Texas troops in the Confederate war, his regiment becoming the nucleus of the Texas brigade which was soon formed and placed under his command in March, 1862, as brigadier-general. Under his daring leadership, the Texans performed prodigies of valor and at the outset gained a reputation for hard fighting and reckless courage that grew with the progress of the war. His brigade was attached to the command of Gen. G. W. Smith at Williamsburg and Seven Pines. He checked General Franklin at Eltham's Landing near West Point, and at Gaines' Mill his brigade and that of General Law were at the front of Longstreet's attack, and the report of General Stonewall Jackson gives credit to the Fourth Texas, led by General Hood, as the first to pierce the Federal entrenchments on the left and capture the batteries. In this fight he was wounded and his gallantry won the brevet of major-general, a rank to which he was fully promoted in October following. Commanding a division composed of his old brigade and that of Law, with five batteries, in Longstreet's corps, he climbed over the mountains at Thoroughfare Gap and struck the enemy on the field of Second Manassas, with decisive results. During the Maryland campaign he took part with his division in the important and heroic delay of the Federal army at the passes of South Mountain, with his comrades holding Hooker's and Reno's corps at Fox's Gap. At Sharpsburg he held the left against Hooker on the 16th of September, and fought desperately about the Dunker church on the 17th. At Fredericksburg he commanded the right of Longstreet's line, and at Gettysburg, stationed on the extreme right of the Confederate army, he made a vigorous and successful attack on the second day against Little Round Top and the Devil's Den. Early in the engagement he received a wound which deprived him permanently of the use of one arm and caused his confinement for over two months. In September, 1863, his division was ordered with Longstreet's corps, in the reinforcement of Bragg in North Georgia, which he at once followed, notwithstanding his wound. He was distinguished in the action on the 19th and 20th of September, 1863, when he gained a brilliant success, crushing the right center of the enemy, capturing artillery, and seizing the Chattanooga road, but while leading a charge with his usual impetuosity he was wounded in the right leg, necessitating its amputation. He was promoted lieutenant-general, of date September 20th, and during Johnston's campaign against Sherman he was in active command of one of the three army corps, though he was so maimed in body that it was with great difficulty that he was able to keep upon his horse. During the fighting from Dalton to Atlanta he played a prominent part, and on July 18, 1864, he was given command of the army, with the temporary rank of general. He endeavored to take Sherman's army at disadvantage in crossing Peach Tree Creek, July 20, 1864, but delay made the blow ineffective. Two days later he fought the battle of the 22nd with well-devised plans that chance and superior forces of the enemy deprived of further effect than checking the Federal advance in that direction. On the 28th he struck the persistent Sherman a heavy blow at Ezra Church, but after the enemy had succeeded in breaking his communications he evacuated Atlanta, having held Sherman at bay for seventy-five days. He then determined to attack Sherman's communications, invade Tennessee and carry the war northward. This resulted in several engagements in North Georgia, and the famous battles of Franklin and Nashville, Tenn. At the close of this campaign General Hood applied to be relieved from the command of his army, and continued to press his application until finally President Davis complied with his request. Bidding farewell on the 25th of January, 1865, to the army of Tennessee, with which he had served over eleven months, he reported to the President at Richmond, was ordered to Texas, and while on the way was informed of the surrender of General Lee. Proceeding on his journey he reached the vicinity of Natchez, Mississippi, where he was detained in "vain endeavors to cross the mighty river" until he learned of the surrender by General Kirby Smith. After that he rode into Natchez May 31, 1865, surrendered and was paroled. Hostilities on the field being ended he engaged in business in New Orleans until his death, August 30, 1879.