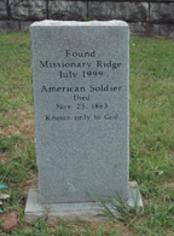 Left: The photo of the Memorial Gate to Chattanooga's Confederate Cemetery is from the 1912 publication Chattanooga and Her Battlefields .  The limestone gate and wrought iron battle flag gate, designed by Lawrence Thompson Dickinson, were erected in 1901 and dedicated the following year.

Right: The Band Pavilion was a project of the A. P. Stewart Chapter of the United Daughters of the Confederacy (UDC) and was erected in 1920.

In the years 1890, 1913, 1921, 1934, 1942, 1945 and 1947, the City of Chattanooga hosted the annual reunion of the United Confederate Veterans with the old cemetery being a prominent feature of each reunion. In the 1950's, the last associate member (son of a veteran) of the Confederate Veterans camp died, leaving the City of Chattanooga as sole trustee.. 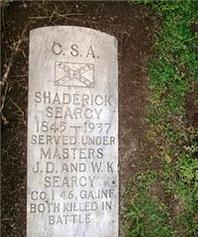 The Confederate Memorial Association was formed May 14, 1874 for the purpose of erecting a monument for the Confederate dead lying in the Chattanooga Confederate Cemetery. The Monumental Association succeeded in raising $2,500 (a large sum for the period "just after the War"). The Memorial Obelisk was designed by G. C. Conner, and it was dedicated May 10, 1877. The occasion was the first, in Chattanooga, which was marked by a display of fraternal feeling by the survivors of both armies. The dedicatory exercises were attended by veterans of both the Federal and Confederate Armies and many other citizens of Chattanooga and the surrounding communities. The obelisk is the centerpiece of the Confederate Cemetery. Its inscription simply reads: "Our Confederate Dead."

For many years the Confederate Memorial Association held annual services on Memorial Day, June 3, the birthday of President Jefferson Davis. After the organization of the United Daughters of the Confederacy that association took over the cemetery work and the annual Memorial service. The Daughters built the stone wall which surrounds the cemetery and the artistic arch and gate, from a design by L. T. Dickinson (Armstrong 254-256).
​​ 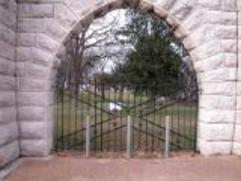 The entrance to the cemetery is on East 5th Street

In 1901, it was decided by the United Confederate Veterans and the A. P. Stewart Chapter of the Daughters of the Confederacy that more ground was needed for the remaining veterans and their wives. Mr. Francis M. Gardenhire deeded over the southern end of the plot for one dollar provided that it was only to be used for a Confederate Cemetery. The limestone gate and wrought iron battle flag gate, designed by Lawrence Thompson Dickinson, were erected in 1901 and dedicated the following year. 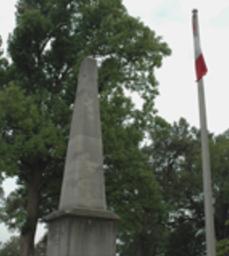 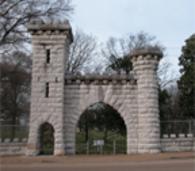 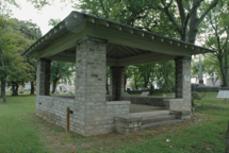 In March 2016, During maintenance on the Cemetery, the Grave of an African American Confederate Soldier was discovered and the marker reset. Read about the discovery in the Chattanoogan.

The first casualties of the War Between the States arrived in Chattanooga in February of 1862 from evacuated hospitals in Nashville due to the fall of Fort Donelson. General Johnston called Dr. Samuel H. Stout to take charge of the hospital facilities in Chattanooga. He came in March and found only one hospital,. the Academy Hospital on a spur of Cameron Hill. He soon upgraded that and opened the Newsom Hospital. When General Braxton Bragg came to Chattanooga, he inspected these two hospitals, found them in good order (unusual for Bragg), and placed Dr. Stout in charge of the general hospitals in his Department of the Army of Tennessee.

As Bragg's forces gathered in Chattanooga, the need for more facilities became apparent, and Dr. Stout opened other hospitals in the area, including the Gilmer Hospital also on Cameron Hill, the Bragg at Ringgold, the Buckner, the Withers Hospital at Tyner's Station (the Silverdale Confederate Cemetery holds the remains of men who died at that hospital), the Crutchfield House, which became known as Foard's Hospital, and others in Cleveland, Tunnel Hill, Catoosa Springs, Dalton and Atlanta.

The boom of cannons and the rattle of musketry on New Year's of 1863 brought a wave of wounded by train from the Battle of Murfreesboro that overflowed the Chattanooga hospitals. Every available building was appropriated: practically every church, every hotel and every public building, including warehouses. Bragg's men were coming in rags and often barefoot. Small-pox struck, and the countryside was filled with bushwhackers. It was only safe for soldiers to travel in large groups. Local residents took up collections of blankets, clothing, beds and bed linens, chickens, butter, milk and vegetables. No ice was to be found. Drinking water became scarce as only one well just off Market Street at 6th served everyone.

In February of 1863, Bragg made Dr. Stout Medical Director of all the General Hospitals of the Army in the Department of Tennessee. But in June, Bragg gave Stout the word to begin evacuating Chattanooga. Union General Rosecrans was pushing this way. Stout instituted a plan that mobilized a whole hospital unit, minus the building, to a new location. Those men who died in Chattanooga Confederate Hospitals were originally buried in a plot of ground beside the river, in the vicinity of the current Manker Patten Tennis Club. But the river rose and fell over some of the graves and the wooden headboards were lost for about 141 of them. The ground came to be partly a pasture and partly a ball field. After the war, the veterans sought to move the graves to higher ground and purchased for $750 the northern portion of the current site from George W. Gardenhire in 1867. A man named Sively was employed to disinter the remains and box up the bones and re-bury them in this new site.

In the 1880's a trustee system was set in place for management of the cemetery in co-operation with the City of Chattanooga, with designated trustees being descendants of Confederate soldiers and the City as a trustee. In the 1890's various Confederate burials were found during work for the Chickamauga and Chattanooga National Military Park and they were re-interred in the Chattanooga Confederate Cemetery.

Since there was no way to know exactly where any individual's remains were re-interred in the northern section, the tablets you see in that section were placed in 1913 to identify the known names in alphabetical order, by the state and regiment which they served. Where names could not be related to command or state, they were placed separately. The list had been provided in 1876 by R. L. Watkins who assisted in the removal from the original site to this present one.

Around 1992, the Trustee situation and the decaying condition of the cemetery was brought to the attention of Mayor Gene Roberts. He authorized City co-operation with descendants of Confederate veterans to maintain and upgrade the cemetery. In 1994, funds were raised by members of the local Sons of Confederate Veterans and Military Order of the Stars and Bars and restoration of the cemetery began. Monuments were uncovered where grass had grown over them; cast iron plaques were scraped and painted; monuments were up-righted, repaired, and cleaned; a new roster of burials was made and placed on the internet; additional stones were placed for burials known to be there from obituaries but had no stone present and various and other sundry maintenance procedures were done. Much of this work was done by volunteers with the co-operation and help of the City of Chattanooga. The centerpiece of the restoration is the repair and restoration of the cast iron gates at the entrance of the cemetery and which represent the Confederate battle flag. In 1995, the restored cemetery was rededicated with attendees from all over the South.


The names of some of the veterans interred from the large monument down toward the entry gate may be recognized by Chattanoogans today. Captain S. J. A. Frazier was the developer of a part town originally called "Hill City" but now known as North Chattanooga. He donated $10,000 for the building of a bridge across the river, now known as the Walnut Street Bridge. Frazier Avenue is named for him. Colonel J. C. Nisbet wrote a book entitled Four Years on the Firing Line. Benjamin Lloyd Goulding was a member of the "lmmortal 600" human shields used by the Union in Charleston, South Carolina, weighed only 81 pounds when paroled. He became the founder of the first Weather Bureau in Chattanooga.

There are others whose names may not be as familiar to modern residents, but who have fascinating stories. Shadrick Searcy is one buried here, who started the war as a body servant to two brothers named Searcy from Talbotton, Georgia. Both joined the 46th Georgia Infantry and Shadrick went with them. William was killed at Kennesaw and James was killed at Franklin. Shadrick stayed with the Army of Tennessee until the surrender in Greensboro, North Carolina, in April of 1865. He settled in Chattanooga and received a Tennessee State Confederate Pension until his death in 1936.

​​The Chattanooga Confederate Cemetery is not only a resting place for some of the finest men who ever graced our city, but it is also a treasure trove of our history. Those who would minimize the importance of the life stories resting there should remember the words of George Santayana (1863-1952),   U. S. philosopher and poet: "Those who cannot remember the past are condemned to repeat it."

The famous 19th Century British statesman James Gladstone once said:"Show me the manner in which a nation or community cares for its dead, and I will measure with mathematical exactness the tender mercies of its people, their respect for the laws of the land, and their loyalty to high ideals". 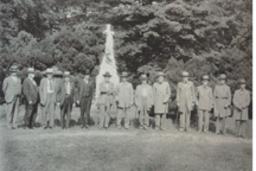 ​Another is Sgt. Edward J. Wentworth of the 19th Michigan Infantry, Union army, who was on his way to a  military prison but was off loaded from a train in Chattanooga because he was so weak and near death. The staff at Academy Hospital tried in vain to save him, and he died in April of 1863. He was buried at peace with his former enemies.  Generally, you won't find Union Soldiers buried in Confederate cemeteries.​

In the year 2000, the last burial in the cemetery involved the remains of a soldier found during the excavation for a swimming pool on Missionary Ridge around that time. While he was unknown as to being a Northern or Southern soldier, it was felt he most likely was a Confederate and thus was buried in the Confederate Cemetery. This also followed the tradition established when bodies were found during work in the National Park in the 1890's. 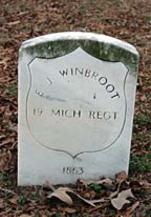