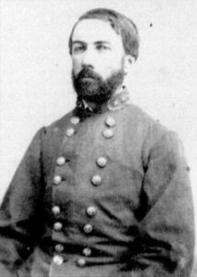 Lieutenant-General Daniel Harvey Hill was born at Hill's Iron Works, South Carolina, July 12, 1821, of Scotch-Irish lineage. His grandfather, a native of Ireland, built an iron foundry in York district where cannon were cast for the Continental army until it was destroyed by the British. This ancestor also fought gallantly as a colonel in Sumter's command. General Hill was graduated at West Point in 1842, in the class with Longstreet, A. P. Stewart, G. W. Smith, R. H. Anderson and Van Dorn, and his first service was on the Maine frontier. During the Mexican war he participated in nearly every important engagement either under Scott or Taylor, and attracted notice by his conspicuous courage. He soon rose to the rank of first-lieutenant, won the brevet of captain at Contreras and Churubusco, and that of major at Chapultepec, where he was one of the first of the storming party over the ramparts. When his State legislature voted swords to the three bravest survivors of the war, one was awarded to Hill, He served at Fortress Monroe in 1848, and on February 28, 1849, resigned from the army to accept the professorship of mathematics at Washington college, Virginia. In 1852 he was married to the eldest daughter of Rev. Dr. R. H. Morrison, and in 1854 he became a professor in Davidson college, North Carolina. In 1859, impressed with the duty of preparing the South for defense, he accepted the position of commandant and manager of the military institute at Charlotte, N.C. During this period he was the author of several educational and theological works. He led his cadets to Raleigh, and made drill-masters of them, and after instructing the North Carolina volunteers was permitted to select twelve of the best companies as the First regiment, of which he was commissioned colonel. With his regiment he was assigned to command in the defenses of Yorktown. He won the first battle of the war at Bethel, where, as he wrote his wife, "I was baptized and worshiped till I was sixteen years old, the church of my mother." In September, 1861, he was promoted brigadier-general, and assigned to the command of the North Carolina coast. Reporting to Johnston in December, 1861, he was in command on the left at Leesburg, and being promoted major-general was in command of the first division of Johnston's army to enter Yorktown, and the last to leave. At Williamsburg his men were distinguished and at Seven Pines Longstreet reported: "The conduct of the attack was left entirely to Major-General Hill. The success of the affair is sufficient evidence of his ability, courage and skill." He took part in the battle of Mechanicsville, and at Gaines' Mill struck a decisive blow on the enemy's right. "Pressing forward, "as Lee reported, "with unfaltering resolution, he reached the crest of the ridge, broke the enemy's line and drove him in confusion towards the Chickahominy." At Malvern Hill his gallant attack was rendered partly fruitless by a lack of support. During the Manassas campaign he held in check the Federals at Fredericksburg, and during the concentration of Lee's army at Sharpsburg he commanded the four thousand men who held the pass at Crampton's Gap, in the face of McClellan's army. He fought with his accustomed skill and effect at Sharpsburg, where three horses were killed under him. In February, 1863, he resumed command in North Carolina and was making active demonstrations when called to Petersburg. With his command extending to the James, he guarded the capital and repelled the advance of General Dix. On July 10th he was appointed lieutenant-general and put in command of the divisions of Cleburne and Breckinridge. At Chickamauga he was permitted just before night to take charge of the forward movement of three lines, which swept over the breastworks of Thomas and caught 5,000 prisoners. With Longstreet and Forrest, he endeavored to reap the fruits of the fighting on that bloody field, but they were doomed to disappointment. Unmeritedly accused of too much prominence in the petition for the removal of the commanding general, he was relieved of command, but he volunteered on the staffs of Beauregard and Hoke and finally on the urgent request of Johnston and Beauregard he was assigned to duty at Charleston, and to the command of a remnant of the army of Tennessee in its retreat before Sheridan, until Bentonville, where he led his division in its last charge. For some years after the war he edited a magazine at Charlotte which was devoted to Southern development and called "The Land We Love." In 1877-80 he was president of the Arkansas Industrial university, and subsequently president of the military and agricultural college of Georgia. He died at Charlotte, N. C., September 24, 1889.