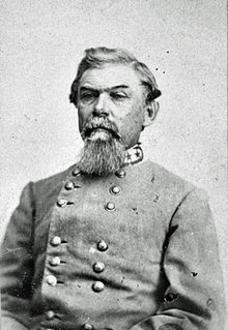 Lieutenant-General William J. Hardee was born in Camden county, Georgia, in November, 1815. After receiving a military education at West Point, he entered the army with the class of 1838, as a second-lieutenant of the Second cavalry, and was promoted first-lieutenant in 1839, and served in the Florida war of 1840. He was then sent to Europe by the government as a member of a military commission to study the organization of foreign armies, and in that capacity visited the military school at St. Maur, France.
In 1844 he was promoted captain, and in 1846 crossed the Rio Grande with General Taylor. He behaved with gallantry in the Mexican war, was taken prisoner at Curricito, but exchanged, and for his valor at La Hoya was brevetted major. In 1853 his professional accomplishments caused his selection by the secretary of war, for the compilation of a system of infantry tactics, which was adopted in March, 1855. In the following year "Hardee's Tactics" was introduced at West Point, where he was appointed commandant with the rank of lieutenant-colonel. In 1861 he resigned this commission and entered the Confederate service as colonel of cavalry March 16th, being assigned to command at Fort Morgan, Ala. On June 17th, he was promoted to brigadier-general, in which rank he organized a brigade of Arkansas regiments, and operated in that State until called with his men across the Mississippi, when he was commissioned major-general and put in command of a division of the army in Kentucky and Tennessee under Albert Sidney Johnston. He led the advance from Corinth in command of the Third army corps, and commanded the first line of attack at Shiloh, where he was wounded, but managed his command with such energy that he was promoted major-general.
In the following summer he was put in immediate command of the army of the Mississippi, afterward called the army of Tennessee, and during the Kentucky campaign he commanded the left wing of Bragg's army. In the battle of Perryville he bore a conspicuous part, and he was immediately afterward promoted to the rank of lieutenant-general. At the battle of Murfreesboro the left wing under his masterly leadership was successful in the fight, and he was especially commended by General Bragg "for skill, valor and ability."
General Hardee had now well earned the exalted rank which he held and a military reputation which was tersely expressed by his soldiers in the cognomen "Old Reliable." In 1863 he was detailed to defend Mississippi and Alabama, but returned to the command of his corps at Chattanooga, and commanded the right wing at Missionary Ridge, where General Thomas declared he was "the most efficient general the Confederacy had on the field." The subsequent maneuver of his troops at Cassville and his masterly retreat in echelon of divisions won the renewed admiration of his opponents. On December 2, 1863, he succeeded General Bragg in command of the army, but soon turned this over to General Polk, who in turn gave place to Gen. J. E. Johnston. Under the latter and his successor, J. B. Hood, he commanded a corps of the army of Tennessee through the Atlanta campaign, taking a prominent part in the fighting at Resaca, Kenesaw Mountain, and other points, and particularly at Peach Tree Creek and the battle of July 22d, where he commanded the flank movement against the Federal left wing. His corps was again engaged at Jonesboro and the last fighting of the campaign.
In October, 1864, he was assigned to command the department of South Carolina, Georgia and Florida, with the task of collecting at Savannah forces to operate against Sherman's advance. The troops he required were no longer to be found in the South, and by one of the most masterly retreats of the war he evaded Sherman's overwhelming force before Savannah, and withdrew to Charleston and thence to Columbia. At Averysboro, in March, 1865, he punished the enemy effectively, and a few days later he led in the battle of Bentonville the last charge that was made by the Confederacy's war-worn soldiers, and his only son, sixteen years of age, was among the last to fall. In this last battle of the four years, with undiminished spirit, the general, as Johnston has described it, "with his knightly gallantry dashed over the enemy's breastworks on horseback in front of his men." It is told of General Hardee, illustrating his thoroughness as a soldier, that he was the only lieutenant-general who personally inspected the arms and accoutrements of each soldier of his corps. General J. E. Johnston said of him that "he was more capable of commanding twenty thousand men in battle than any other Confederate general." General Hardee died at Wytheville, Va., November 6, 1873, and his remains were interred at Selma, Ala., where he had resided after the war.