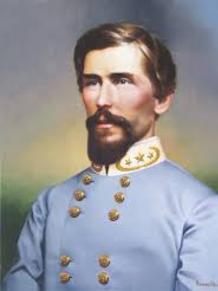 Major-General Patrick R. Cleburne, one of the most brilliant soldiers of the Confederate States, was a native of Ireland. When twenty-two years of age he joined the British army as a private, and there took his first lessons in drill and discipline. For good conduct he was promoted to the rank of corporal. After remaining three years in the British army he procured his discharge and came to America. He settled in Arkansas, became a hard student, was admitted to the bar, and the year 1861 found him practicing law in Helena, enjoying in his profession and in society the honorable position which his toil and native worth had gained for him. He was among the first to answer the call to arms. He raised a company and with it joined the First, afterward known as the Fifteenth Arkansas regiment, of which he was almost unanimously elected colonel. His first campaign was with General Hardee in Missouri. At its close he went with Hardee to Bowling Green, Ky. He had during this short military service so impressed his superiors that he was assigned to command of a brigade, and on March 4, 1862, was commissioned brigadier-general. At the battle of Shiloh he proved that his abilities had not been overestimated, and during the reorganization of the army at Tupelo he brought his brigade to a very high state of discipline and efficiency. He had that valuable combination of qualifications for command which enabled him to enforce discipline and at the same time secure the esteem and confidence of his troops. At Richmond, Ky., he commanded a division whose impetuous charge had much to do with winning the magnificent victory over "Bull" Nelson's army. Though painfully wounded in this battle, a few weeks later he led his men in the fierce conflict at Perryville, with his usual success. On December 13, 1862, he was commissioned major-general. He was in the memorable attack upon the right of the Federal army at Murfreesboro, which drove the Union lines until the mass in front became at last too thick for further penetration. Again at Chickamauga Cleburne made a charge, in which his men by desperate valor won and held a position that had been assailed time and again without success. At Missionary Ridge, in command at the tunnel, he defeated Sherman, capturing flags and hundreds of prisoners, and when involved in the general defeat, he made a heroic fight at Ringgold gap and saved Bragg's artillery and wagon train. In recognition of this gallant exploit, the Confederate Congress passed the following joint resolution: "Resolved, that the thanks of Congress are due, and are hereby tendered to Maj.-Gen. Patrick R. Cleburne, and the officers and men under his command, for the victory obtained by them over superior forces of the enemy at Ringgold gap in the State of Georgia on the 27th day of November, 1863, by which the advance of the enemy was impeded, our wagon trains and most of our artillery saved, and a large number of the enemy killed and wounded." One of the most brilliant episodes of the Atlanta campaign of 1864 was Cleburne's victory at Pickett's mill over Howard's corps of Sherman's army. In the awful carnage at Franklin, November 30, 1864, Cleburne, the "Stonewall Jackson of the West," gave his last battle order. Within twenty paces of the Union line, pierced by three wounds, he fell, and on the battlefield expired. His death was a disheartening blow to the army of Tennessee, and was mourned throughout the whole South.