General Benjamin Franklin Cheatham.--There was no name in the army of Tennessee more familiar to the soldiers than that of Cheatham, and no officer of the Confederate army possessed to a higher degree than he the affectionate regard of his men. He was born in the city of Nashville, October 20, 1820. He was captain of volunteers in the Mexican war, and was distinguished in its severest battles. On the outbreak of the war between the States he espoused heartily the cause of the South and was appointed major-general in the provisional army of Tennessee, May 9, 1861. On July 9th of the same year he was made a brigadier-general in the provisional army of the Confederate States. From the very first, General Cheatham gained the reputation of being a brilliant fighter. He understood well the art of managing men. He was careful in looking after their comfort, and when it was proper to do so, carefully guarded their safety. But when duty required it, he was ready to face any peril and set before his soldiers an example of valor which they followed with alacrity and zeal. It is praise enough for his command to say that it was the equal of that led by the renowned Pat Cleburne. He was in many fierce battles and always bore a conspicuous part. In the battle of Belmont he led three regiments of Pillow's force, and it was his movement to the enemy's rear that won the day. He was commissioned major general March 10, 1862, and we find him on the field of Shiloh commanding the second division of the first corps under Leonidas Polk. At Perryville, Ky., it was Cheatham's division that opened the fight, and throughout that hotly-contested battle pressed steadily forward. Again at Murfreesboro Cheatham's was one of the four divisions which drove the Federals back a distance of between three and four miles, doubling them back upon their center until their line was at right angles to its original position. At Chickamauga we find Cheatham's division attached to the right wing under Leonidas Polk, sustaining the reputation gained on so many former occasions. At the battle of Missionary Ridge, when the Confederate left center had been broken, Hardee threw a part of Cheatham's division directly across the path of the advancing Federals and held the ground until darkness closed the fight. In all the movements of the army of Tennessee in 1864, Cheatham and his men had their full share of peril and of honor. At the battle of Kenesaw Mountain (June 27th), Cheatham's and Cleburne's divisions probably inflicted upon the Federals a heavier loss than they suffered on any other part of the field. In the battles around Atlanta, Cheatham had command of a corps, and in the battle of July 22d, his men captured five cannon and five stand of colors. In Hood's final campaign he led his corps into the thickest of every fight. At the close of the war, Cheatham returned to the pursuits of peace, blessed with the society of his neighbors, whose esteem and friendship he always enjoyed, surrounded by a lovely family and cheered by his noble wife. General Cheatham's personal appearance was thus described a few years after the war by the historian, E. A. Pollard: "General Cheatham is squarely and firmly built, and is noted for his extraordinary physical strength. He is slightly round-shouldered, and his weight is about two hundred pounds. His height is about five feet eight inches; his eyes are light blue, clear and expressive; his hair, light brown; his complexion, fair; and his moustache--he wears no other beard--very heavy. His forehead is broad and his face expressive of that imperturbable good humor which characterizes him not more in social life than on the battlefield." General Grant, who was a personal friend of his, offered him an appointment in the civil service, but he declined. He served four years as superintendent of the State prison. In 1885 he became postmaster at Nashville, a position he retained until his death, September 4, 1886. The love and esteem in which he was held were evidenced by the vast attendance upon his funeral, which was declared at the time to be the most imposing ever held in Nashville. 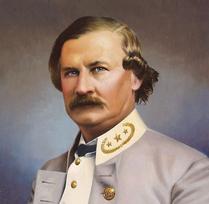