Lieutenant-General Nathan Bedford Forrest in 1865, private of Cavalry in 1861. As Senator Daniel has said, "what genius was in that wonderful man! He felt the field as Blind Tom touches the keys of the piano. 'War means killing," he said, " and the way to kill is to get there first with the most men." He was not taught at West Point, but he gave lessons to West Point. His career was quite as brilliant and devoted in its allegiance to duty in peace as it was in the conflict of arms. His father's family had moved from Virginia, before the Revolution, to North Carolina, where every member able to bear arms at that time fought in the cause of independence. His parents moved thence to Bedford county, Tennessee, where he was born July 13, 1821. In 1834 he moved with his father to Marshall county, Mississippi, where the latter soon died, leaving young Forrest to support the widow and family with no resources other than a small hill farm. He undertook this work with such devotion and energy, that while neglecting his own education he provided liberally for that of his brothers and sisters, and going into business at Memphis became able to purchase a large plantation, and at the outbreak of the war was one of the wealthiest planters in Tennessee.

Soon after entering the Confederate service June 14, 1861, as a private in White's mounted rifles, he obtained authority to raise a regiment of cavalry, the equipment of which he purchased at his private expense at Louisville. With great ingenuity and daring he brought these supplies to Memphis after eluding the Federal authorities and defeating a body of troops with a force of seventy-five Kentucky Confederates he had called to his aid. With his regiment he joined the forces at Fort Donelson, and after distinguishing himself in the conflict with the Federals, led his men through the enemy's lines when surrender was determined upon.

Joining Albert Sidney Johnston, he was in the heat of the fight at Shiloh, and though wounded refused to leave the field until the safety of the army was assured. Subsequently, the Federals having occupied middle Tennessee, Colonel Forrest made a series of brilliant cavalry movements into that territory that made his name famous throughout America.

Promoted brigadier-general July 21, 1862, he hung upon Buell's flank during the movement into Kentucky, protected Bragg's retreat, and while the army was in winter quarters actively covered the Federal front at Nashville, continually doing damage to the enemy. In 1863, in an effort to break Rosecrans' communications, he entered Tennessee with less than one thousand men, captured McMinnville, and surprised the garrison of 2,000 at Murfreesboro, capturing all the survivors of the fight, including-General Crittenden. General Streight, having started on a cavalry raid to Rome, Georgia, was pursued and caught up with, and so impressed by Forrest's demand for surrender, that he turned over his entire command, which was in such disproportion to their captors that Forrest had to press into service all the citizens in reach to assist in forming an adequate guard.

In the great battle of Chickamauga, he commanded the cavalry of the right wing, and was distinguished in the fight; but he was so dissatisfied with the incompleteness of this Confederate victory that he tendered his resignation. Instead of its acceptance he was promoted major-general and assigned to the command of all cavalry in north Mississippi and west Tennessee, and the guardianship of the granary of the Confederacy. With a small force he entered west Tennessee and recruited several thousand hardy volunteers, which, with some veteran troops, he welded into the invincible body known as" Forrest's Cavalry."

In February, 1864, General Smith with seven thousand mounted men was sent against him in co-operation with Sherman, but was utterly routed at Okolona and Prairie Mound. In return Forrest rode through Tennessee to the Ohio river, and captured Fort Pillow, Union City and other posts with their garrisons. On June 8, 300 Federals under General Sturgis entered Mississippi. Forrest had only 3,200 men; but at Brice's Cross Roads he struck the straggling Federal column at its head, crushed that, and then in detail routed successive brigades until Sturgis had suffered one of the most humiliating defeats of the war, losing all his trains and a third of his men. Gen. A. J. Smith renewed the invasion with 14,000 men, but retreated after a desperate battle at Harrisburg, near Tupelo. Reorganizing his beaten forces Smith again advanced with reinforcements from Memphis, and Forrest was compelled to foil the enemy by taking half his force and making a sixty-hour ride to Memphis, the daring entry of which compelled Smith's rapid retreat.

Then for a time General Forrest made havoc with the Federal transportation, garrisons and depots in Tennessee, exploits crowned by the capture and destruction of six million dollars' worth of the enemy's supplies and a gunboat fleet, at Johnsonville,--"a feat of arms," wrote Sherman, "which I must confess excited my admiration." After the fall of Atlanta, he joined Hood at Florence and fought at Franklin and Nashville. As commander of the rear guard of the retreating Confederate army, Forrest displayed his most heroic qualities, with hardly a parallel but the famous deeds of Marshal Ney while covering Napoleon's retreat from Moscow.

In February, 1865, he was promoted lieutenant-general, and given the duty of guarding the frontier from Decatur, Alabama to the Mississippi. With a few hundred hastily gathered men he made his last fight at Selma, and on May 9 he laid down his arms. It is stated that he was 179 times under fire in the four years, and he said, "My provost marshal's books will show that I have taken 31,000 prisoners." After the war he was president of the Selma, Marion and Memphis railroad until 1874. He died at Memphis, October 29, 1877. By European authority he is pronounced the most magnificent cavalry officer that America has produced.

MYTHS ABOUT NATHAN B. FORREST

The following article by Michael Kelley, an African American, was recently published in the Jacksonville, Florida newspaper.  It was written in defense of N. B. Forrest against misinformed radicals trying to rename the Forrest High School in Duval County, Florida.

"I believe in the teachings of Nathan Bedford Forrest: Although we differ in color, we should not differ in sentiment."

Forrest was a successful slave dealer, but renowned for his humane policies. He purchased broken families and reunited them. He purchased slaves from abusive masters to protect them. He refused to sell slaves to people he knew to be abusive. He gave newly purchased slaves passes so they could seek out their new masters.

When the war started, 45 male slaves chose to ride with Forrest on the promise of freedom if the South won. They served as combat soldiers and Forrest's personal armed bodyguards.  Eighteen months after the war started, Forrest became convinced the South would lose and he would die in combat, so he freed these men. All of them stayed with him.

The author cited the Fort Pillow massacre and asserted that "there was no Nuremberg trial for Forrest." This is clear misstatement of history. In 1871, Congress convened a committee to investigate Fort Pillow. Chairman William Tecumseh Sherman, Forrest's greatest enemy, was quoted before the hearing began as saying "We are here to investigate Forrest, charge Forrest, try Forrest, convict Forrest and hang Forrest."

When the committee considered written evidence and firsthand testimony, it concluded there was no Fort Pillow Massacre. There were "incidents on the riverbank," which the committee acknowledged Forrest stopped as soon as he arrived on the scene. Union officers admitted there was never a surrender of the Union forces. Forrest did take 39 black soldiers prisoner and turned them over to his superiors while he transferred the 14 most seriously wounded black Union soldiers to the U.S. steamer Silver Cloud, hardly acts that would qualify as "war crimes."  Forrest did have his "Nuremberg trial" and was found innocent.

On July 4, 1875, in Memphis, Forrest gave a speech to a black political and social organization, the Jubilee of Pole Bearers.  Among the statements he made that day: "We were born on the same soil, breathe the same air, live in the same land, and why should we not be brothers and sisters. "I want to elevate every man, and to see you take your places in your shops, stores and offices. "I feel that you are free men, I am a free man, and we can do as we please. I came here as a friend and whenever I can serve any of you I will do so. We have one union, one flag, one country; therefore, let us stand together. Although we differ in color, we should not differ in sentiment. "Do your duty as citizens, and if any are oppressed, I will be your friend. I thank you for the flowers, and assure you that I am with you in heart and hand."

The Duval County School Board should not change the name of Forrest High School, but instead educate students and teachers to Forrest's true sentiments of reconciliation and unity. They still have weight today. 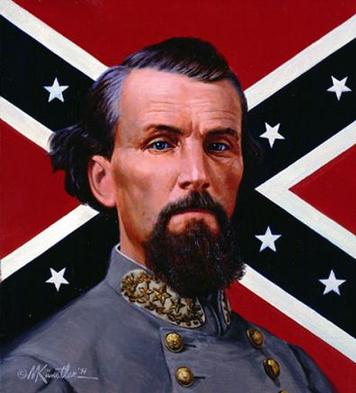